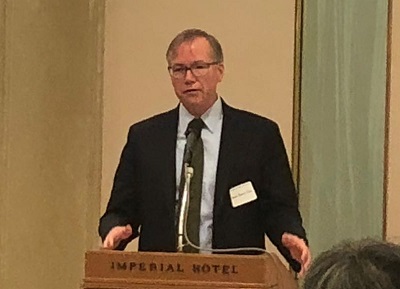 Thousands of miles away from the Pulitzer Hall at 116th Street and Broadway in New York City, and decades after stepping into that historic building as a rookie journalism student, 18 Columbia Graduate School of Journalism alums met for an early breakfast on January 30th at the Imperial Hotel in Tokyo. They were joined by three Business School alums from the Columbia Alumni Association of Japan's executive committee.

For many, it was the first time they were meeting recent graduates as well as seeing old friends after so many years. There was more than half a century between the most senior and the most junior journalism alums in attendance, Junji Kitadai (J'63) and Ilgin Yorulmaz (J'16), respectively, yet everyone connected immediately. Bill Grimm (J'90), now a publisher at a missionary in Tokyo, joked that the "J-School didn't even have computers back in my time." There was also a lively discussion about current issues like fake news and threats to press freedom even in the U.S. under the current administration.

"If journalism students ever had a doubt about the relevancy of their profession," dean Steve Coll said, "then Trump administration has quickly eliminated those doubts."

Dean Coll, who is serving his 5th year at the J-School, also spoke about their international strategy, which brought him and Janine Jacquet, Associate Dean of Alumni and Development, to Tokyo for a short visit. The school has been evolving with the times and regularly updating its curriculum in accordance with major shifts in media and technology in the last couple of years. They have recently added graduate fellowships in migration; education; energy and environment; and other public interest reporting areas. They also have a new data degree program. Considering that the current student body is 40 percent international from nearly 40 different countries, dean Coll said they would welcome high quality applicants from countries like Japan as had been the case in the past when these fine men and women graduate. His wish may soon come true, because a new scholarship sponsored by Nikkei Inc., parent company of the Financial Times and the Nikkei Asian Review, among others, has just become available thanks to the efforts by a J-school alum, Tsuyoshi Sunohara (J'87), the Managing Executive Officer at Nikkei. The new $100,000 scholarship in data or business reporting is open to a student who is a resident in Asia and who wishes to specialize in data or business journalism.

It is hoped that the event, which was organized under the blessings of the Columbia Alumni Association of Japan and attended by its president, Shuichi Fukuda (MBA'76), will lead to other J-school alumni events and even kickstart its own club in the future.